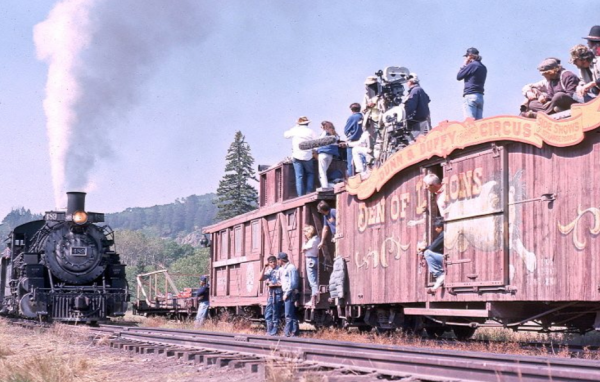 Thirty years ago in 1989, millions of filmgoers were introduced to the Cumbres & Toltec Scenic Railroad when it starred as the “circus train” in the blockbuster movie, Indiana Jones and the Last Crusade.  The film starred Harrison Ford and Sean Connery and was directed by Stephen Spielberg from a story co-written by George Lucas.

In the movie, River Phoenix, playing a young Indiana Jones, tries to outrun a band of grave-robbers by hopping on a passing circus train.  The villains follow him in one of the most thrilling railroad sequences ever filmed as Indiana jumps from car to car, encountering snakes, a rhino, giraffes and even a roaring lion.

In the end, Indiana escapes and runs up to the front door of his boyhood home.  You can too!  The house used in the movie as the home of Indiana Jones is in Antonito, Colorado, and is today operated as a bed & breakfast.  It’s just a short walk from the B&B to the Antonito Station, when you can board the Cumbres & Toltec and ride over the same route that was used in the movie, traveling by steam locomotive for 64 miles across the Rocky Mountains.  You might not encounter snakes, a rhino or a giraffe, but you will see railroading just as it was depicted in the film – and you’ll pass by a special water tower erected for the movie which Indiana Jones used to make his escape.